India is widely considered to be the world’s largest democracy, yet it also holds the dubious distinction of having the highest number of internet shutdowns worldwide. In 2020 alone, 109 shutdowns were issued in the country. By contrast, the nation with the second highest number of shutdowns (Yemen), had only six. Although the Indian government typically claims these measures are necessary to restore law and order or to prevent social unrest caused by online fake news and misinformation, little concrete evidence is offered to substantiate these claims. In response, Information Controls Fellowship Program (ICFP) fellow Kris Ruijgrok conducted extensive research and in-depth fieldwork throughout 2020 in two Indian states where shutdowns are commonly issued in an attempt to uncover the underlying motivations behind this undemocratic trend.

Kris began by first mapping out the official decision-making process behind the issuance of a shutdown. In India’s federal system, the responsibility for ordering a shutdown during a “public emergency” lies with bureaucrats who answer to state officials -- not the central government. Notably, the ruling party of the state government can -- and routinely does -- transfer bureaucrats from one post to another in a highly politicized manner. Loyal bureaucrats are often rewarded with important positions, while officers aligned with opposing political forces (or those that refuse to do the ruling party’s bidding) are often punished with obscure postings. As a result, even though individual bureaucrats ultimately bear the responsibility for signing shutdown orders, the state government holds such sway over them that these individuals are essentially issuing shutdowns pursuant to the interests of their political masters. And rather than being an option of last resort, internet shutdowns have steadily become the primary initial option for officials facing communal or social unrest challenges. 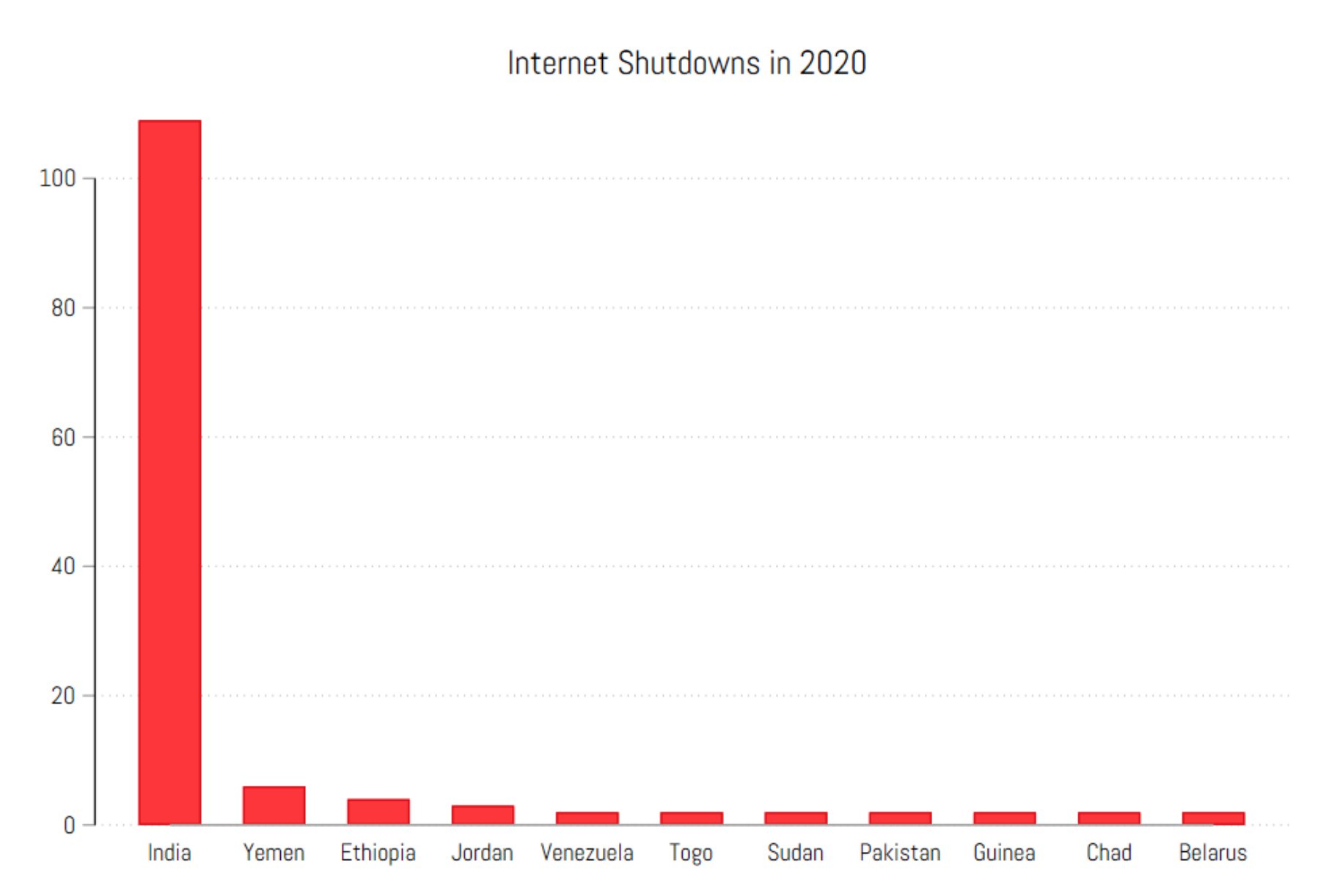 In diving deeper to understand why shutdowns are issued, Kris’ research highlights the role of the Hindu-nationalist Bharatiya Janata Party (BJP). His in-depth data analysis revealed the spectacular rise of India’s internet shutdowns not only runs parallel in time with the BJP’s rise to national power, but also that the shutdowns at issue primarily occur in BJP-ruled states. Kris’ research further indicates that political demonstrations and communal tensions tend to trigger these shutdowns. When political demonstrations or protests occur that either the BJP state government or (BJP) central government deems threatening, a shutdown is likely to follow. In December 2019 for instance, BJP-ruled states issued internet shutdowns amidst a clampdown on those protesting the controversial Citizen Amendment Act. Similarly, communal tensions between Hindu and Muslim residents also tend to result in a shutdown and are at times deliberately provoked by Hindu-nationalist groups closely aligned with the BJP itself. because the party can benefit politically from increased tension. The conflicts that follow these incidents, including the issuance of an internet shutdown, can thus be viewed as a politically-instigated problem -- rather than a social media one as often claimed by government officials.

The rise in internet shutdowns is particularly problematic in India’s Northern and North-Eastern states. The former state (now Union Territory) of Jammu and Kashmir (J & K) alone experienced 230 shutdowns during Kris’ period of analysis. Home to a long-standing movement for self-determination, shutdowns in J & K happen much more often and last longer than anywhere else in the country. Unlike other regions, internet shutdowns also occur in J & K prior to and during elections. Though the Indian government claims the shutdowns are needed to help keep the peace, in practice they serve to suppress collective action and hide any human rights abuses committed by government security forces. On a more symbolic level, the longer shutdowns also serve as a form of collective punishment for Kashmiris striving to obtain greater political recognition.

These collective findings suggest that the use of a political lens, rather than a purely law-and-order perspective, is needed to truly understand the rise in internet shutdowns in India. These shutdowns are not singular events or isolated political decisions, but rather serve as part of a broader trend in the country’s democratic backsliding over the last several years. Kris’ full-length report, Understanding India’s Troubling Rise in Internet Shutdowns: A Qualitative and Quantitative Analysis, is available to read here.

Interested in becoming an ICFP fellow? OTF is currently accepting applications for its next cohort of ICFP fellows. The deadline to apply is June 30, 2021. To learn more about the program and access the application, click here.

As a Senior Information Controls Fellow, Kris worked with the SFLC.in to investigate the politics behind internet shutdowns in In…