The open application window for the ninth class of OTF’s Information Controls Fellowship Program (ICFP) presents an opportunity to look back on how the program arrived at its current state.

The ICFP was launched in the summer of 2014 when OTF itself had been in existence for roughly two and a half years. This was the first fellowship program undertaken. While there is no shortage of fellowships available for researchers, none appeared focused on the specific subset of topics that formed the core of OTF’s Congressionally mandated remit. Citizen Lab at the Munk School of Global Affairs at the University of Toronto originally proposed the idea of the fellowship to OTF in early 2014 at the Stockholm Internet Forum. The fellowship's creation was a result of OTF and Citizen Lab's shared vision of building a community and field for the study of information controls.

By the time of the ICFP’s launch, OTF had received a significant increase in funding that necessitated identifying additional mechanisms to increase funding to areas otherwise underrepresented in OTF’s previous support. In addition, despite a wide range of research fellowships being available, none were identified that were specifically oriented toward the more narrow focus of researching the continued proliferation of information controls. This is exactly the type of gap the ICFP envisioned filling when it was created.

At the outset, the ICFP was jointly administered with Citizen Lab. While OTF provided the funds and was the legal entity a fellow would engage with, Citizen Lab managed many other aspects of the program, including carrying out much of the promotion, jointly reviewing applications, leveraging organizational relationships, and providing critical insights on existing research within the information controls landscape.

In modeling the nascent effort on other successful fellowship programs, the program decided to allow applicants to propose a timeframe and a specific focus area. Applicants would work with a host organization that could provide guidance and oversight which would be selected from a list of previously vetted entities who agreed to serve in such a role. The program also made a distinction between ‘Senior Fellows’ and ‘Seasonal Fellows’ both in terms of the duration and level of compensation. The first year saw a strong pool of applicants express interest and ultimately selected six Senior Fellows and four Seasonal Fellows.

Following the success of this first cohort of fellows, OTF opened a new application window the following year, once again with the help of Citizen Lab. As OTF became more familiarized with the research landscape and the fact that the administrative burden on Citizen Lab increased as its popularity grew, OTF began unilaterally overseeing the program, with Citizen Lab continuing to play a crucial role in both promoting the opportunity and serving as a host organization. Beyond their hands-on assistance, Citizen Lab also hosts the Citizen Lab Summer Institute, where the fellowship was first announced and which served, in subsequent years, as a critical opportunity for fellows to collaborate, communicate and provide OTF with feedback. This event has also been supplemented by the annual OTF summit. These opportunities for a continuous feedback loop have proven critical to improving the fellowship program over time.

As the program matured, a number of fellows continued applying their skillsets to exposing and documenting information controls. Many individuals translated their fellowship into formal employment continuing to advance their area of focus. One of the most common ways this occurred was by becoming full time employees at their host organization. A clear demonstration of the substantial contributions of these individuals. Others found their way to joining similarly situated entities or identifying alternative mechanisms to have their research supported directly. A subset applied to OTF’s primary Internet Freedom Fund in order to continue working on their efforts. The projects OTF supported in subsequent years include a rich history of former ICFP fellows. These include:

Past fellowships demonstrate the important role the program can have in advancing emerging areas of research and as a mechanism for experimentation. This flexibility allows for investigation without the same pressures that an Internet Freedom fund supported project has. The fellowship serves as an important mechanism for exploring and identifying areas that require additional funding. OTF encourages a wide variety of applicants to take advantage of this opportunity undertaking a broad spectrum of research projects that improve the identification, advancement, and adoption of solutions that improve access, privacy, and security to digital technologies.

In order to provide a greater understanding of the ICFP to date, we took a look back at every tranche of fellows since 2014. By identifying and organizing each project undertaken, greater insights can be gained on the program as a whole. Information controls are, by design, a broad topical area that includes a wide range of subject matter areas. In an attempt to better classify the multidisciplinary nature of fellowship projects, the following chart was generated. While doing so inevitably involves a lot of challenging judgment calls, the chart nonetheless demonstrates the various areas of focus with the largest sub-categories being network censorship and the documentation of information controls in specific countries or regions. It is also worth noting that two thirds of all fellowships were 12 months in length with the remainder being of a shorter duration. 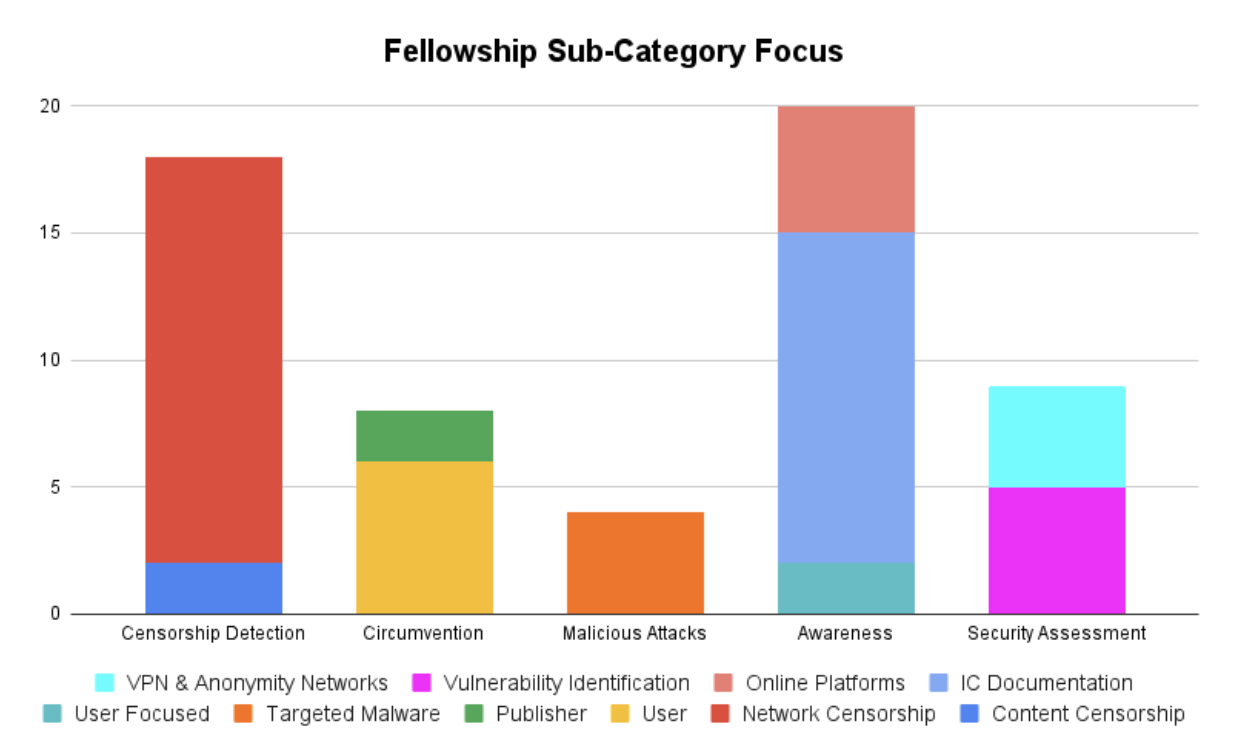 Host organizations have played a critical role in providing guidance and mentorship to fellows. This can come in many forms whether it be assisting with refining the methodology, project implementation, promotion of the outputs or facilitating collaboration opportunities, among others. While host organizations have typically been higher education institutions, especially in the early years prior to the removal of the pre-approval requirement, ICFP has succeeded in increasing the participation of non-profit organizations with 2021 being the first year of full parity. It is common for these non-profit organizations to have high levels of interaction with those the project is trying to benefit which increases the likelihood of impact. 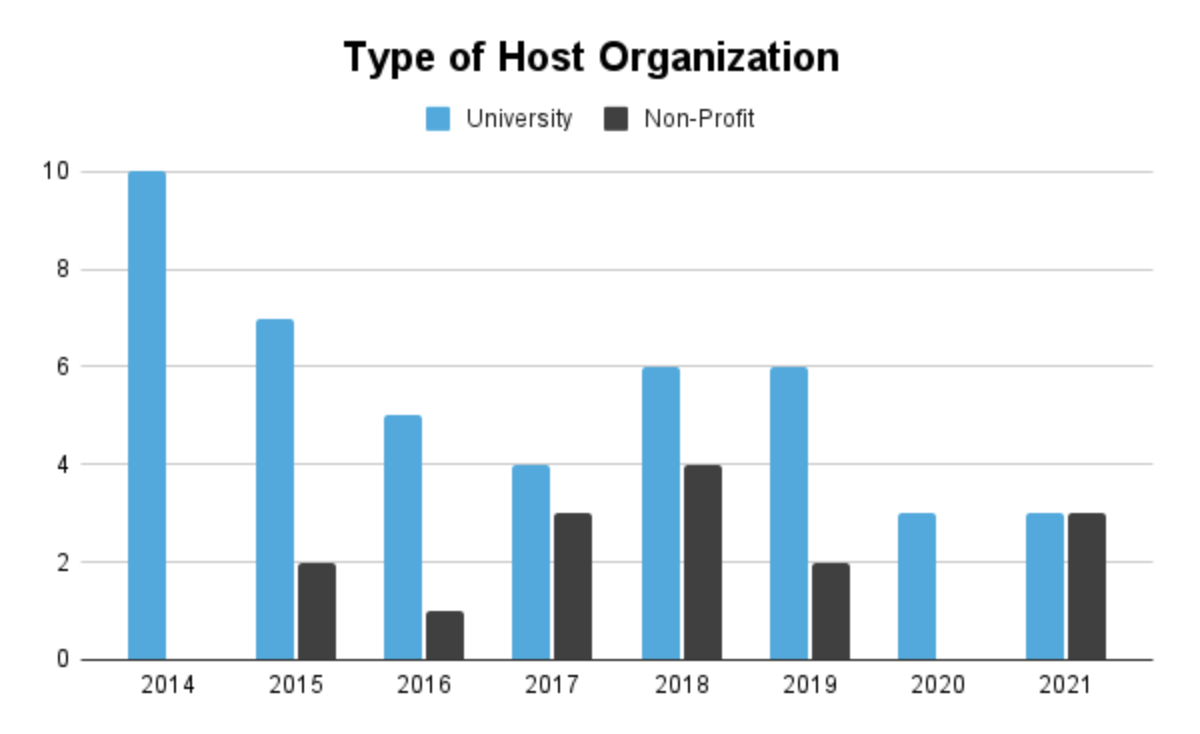 Another insight related to host organizations relates to whether they have previously participated in the ICFP. Given Citizen Lab’s long-standing role, they have the unique position of having been the only entity to serve as a host organization every year since the program’s inception. While the benefits resulting from these long standing host organizations are clear, it is also important to continue to attract new organizations to serve in this role and ensure the ICFP benefits from fresh perspectives and unique skill sets. As the chart below highlights, despite the year to year difference, it is common for new organizations to participate. While 2021 did not see any new entities, it also speaks to the long list of organizations who have already done so over the eight previous fellowship cohorts. 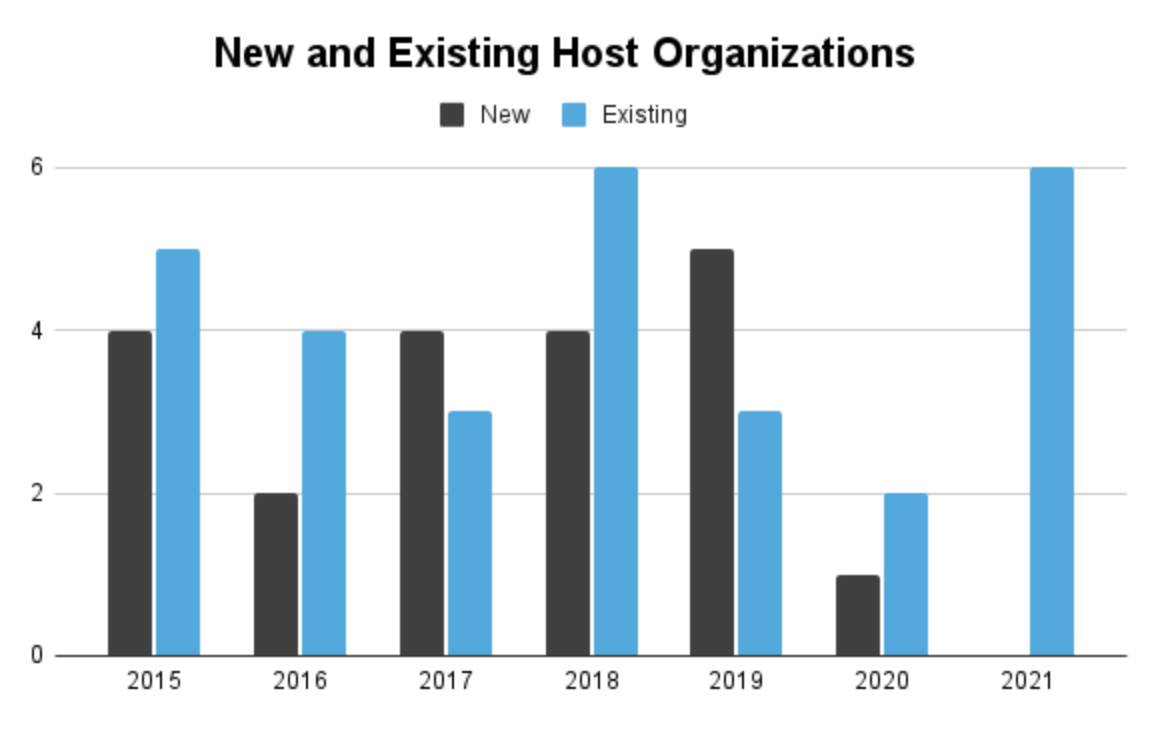 Given this look back at the program’s history, it is important to make note of those who helped foster its success. The program has benefited from each and every fellow who has been supported. Underneath the numbers are an incredible cross section of individuals who have generated extensive impact. You can see the outcomes of each cohort’s projects here: round one, round two, round three, round four, round five, round six, and round seven (round eight will be announced soon). OTF has also benefited from a number of team members who have been instrumental in the success of the program including Liz Pruszko Steininger, Esther Lim, Lindsay Beck, Dan McDevitt and most recently, Wei Fan. Each former and current Advisory Council member has also played a key role: Chris Bronk, Michael Geist, Collin Anderson, Philipp Winter, Roya Ensafi, Stefania Milan and Hadi Asghari. Lastly, it is also important to recognize the countless host organizations that have provided the critical mentorship essential to the many impacts that have resulted from this program.

The deadline for the open application window of the Information Controls Fellowship Program is this Sunday, March 13, 2022. We encourage interested individuals to submit an application prior to this deadline and look forward to reviewing your application. Any questions can be directed to this public spreadsheet or sent to [email protected]

OTF’s Information Controls Fellowship Program (ICFP) is open for applications for its ninth fellowship cohort, with a final deadl…