Authoritarian regimes have long used a variety of repressive tools to control, silence, and punish dissidents living beyond their borders. Yet the advent of the Internet—and its central role in activist communities—has changed the means by which these regimes choose to intimidate those who would dare speak out against them. Today, subtle but pervasive forms of online transnational repression are increasingly common. Activists living outside their homeland are now more likely to encounter digital surveillance, threats, and smear campaigns designed to stifle their opposition and induce self-censorship. Yet the extent to which these tools are used, as well as their overall impact, remain largely unexplored. What tools actually exist in these new digital “toolkits” of transnational repression? And how successful are they in disrupting cross-border information flows? Using the online efforts of Egypt, Syria, and Iran as examples, Information Controls Fellowship Program (ICFP) fellow Marcus Michaelsen set out to find answers.

Through dozens of protected interviews with human rights defenders, journalists, digital security experts, and other civil society activists working in exile, Marcus discovered the negative effects of these repressive tools are indeed pervasive. The Egyptian, Syrian, and Iranian governments all engage in online transnational practices deliberately designed to systematically interfere with the fundamental rights of activists—namely their rights to privacy and freedom of expression. In response, targeted activists experience constant tension and stress, and see their ties to their home country undermined—inevitably altering the dynamics, impact, and outreach of diaspora activism.

Notably, Marcus’ research revealed digital technologies to be at the heart of this new type of transnational repression. The tools most often used in the cases of Egypt, Syria, and Iran include online monitoring and surveillance, account and device hacking, aggressive disinformation campaigns, and online publication hacking. The principal aim of these practices is to spread insecurity and mistrust in transnational networks, silence dissidents living in exile, and undermine cross-border relationships between exiled activists and their homeland communities. In addition, threats—communicated digitally as well as in-person—abound, including threats from embassy agents and threats against the property rights of activists living abroad. In-country assets are routinely frozen, or threatened to be confiscated, if outspoken activists refuse to comply with regime directives.

Those interviewed agreed that the online sphere presented the perfect opportunity for repressive regimes to extend their efforts at control abroad. Not only do digital technologies reduce the costs of exerting political control, they also enable regimes to monitor and respond to diaspora activism with greater scope and speed. Activists the world over must rely on digital platforms to conduct their work—all the more so when operating in exile. But online expression and the use of social media create multiple points of exposure for regime agents to attack via malware, online harassment, and smear campaigns. And when coupled with more traditional methods of repression, such as threats against in-country family members or slander in state-run media, these types of digital threats turn all the more nefarious and effective. Proxy punishments and disparagements like these jeopardize the autonomy and freedom enjoyed by activists living abroad, at times forcing them to choose between their work and their extended family’s safety.

Unfortunately, despite the growing awareness and use of digital security precautions, Marcus found that exiled activists often still feel overwhelmed by the complexity of potential digital threats within the rapidly evolving online environment. With ties across multiple countries and communities, these activists belong to networks in which a successful attack against the weakest link can lead to severe consequences for all involved. An entire team or network is only as protected as its weakest link. This feeling of vulnerability is compounded by the pervasive uncertainty that exists amongst activists regarding the actual technical capabilities of regimes. Activists today can never be sure if their messages and work will remain protected, despite their best efforts and practices. Even in meetings, a hesitancy is growing amongst exiled activists as to what can be discussed for fear of a potential security breakdown. This heightened level of uncertainty exacerbates the chilling effects of repressive campaigns. Needless to say, such an environment is not conducive to the type of engaged and active work required to stand up to entrenched authoritarian regimes. 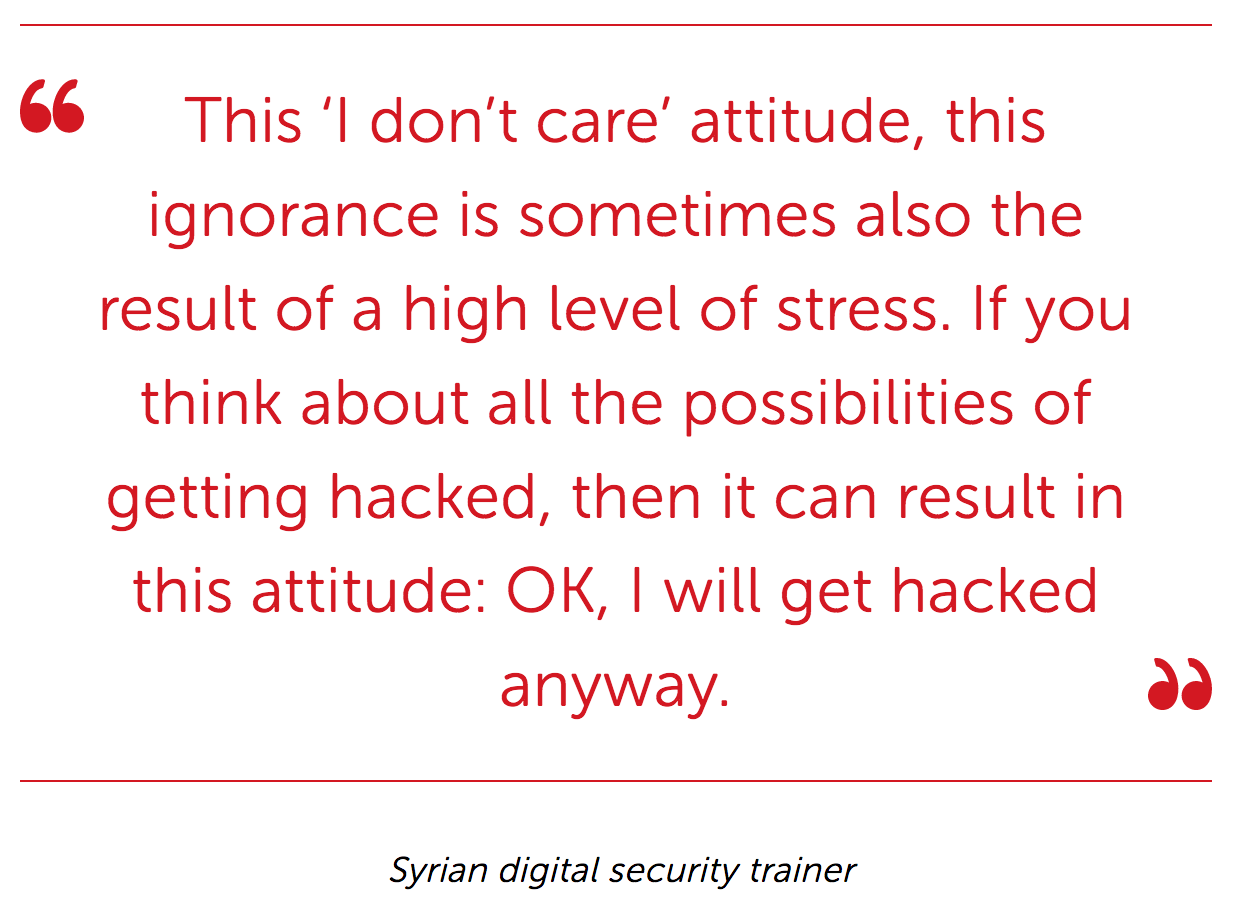 As Marcus’ report demonstrates, practices of digital transnational repression pose both human rights problems and political problems. By relying on a toolkit of transnational repression, regimes such as Egypt, Syria, and Iran are able to foster restraint and self-censorship among activists, undermine their ties to the home country, and raise their level of tension and stress. The negative effects of these information controls should not be overlooked. With close ties to their home country as well as contacts to international organizations, media, and policy circles, exiled activists occupy a strategic position to leverage critical information against authoritarian regimes. Now more than ever, these voices are needed. Accordingly, their unique position must be strengthened to combat the expansion of online transnational repression. Threats against activists in exile and diaspora communities exemplify the broader trends of rising authoritarian politics and shrinking civic space. As long as repressive regimes are able to muzzle the voices of online opposition, civil society’s ability to use digital tools to coordinate, organize, and exchange ideas will be in danger.

As a Senior Information Controls Fellow, Marcus worked with Hivos to investigate digital threats against diaspora activists from …