We celebrate the Internet as a safe space, where we communicate and express ourselves free of censorship and surveillance, connecting through the people we trust. And you are invited!

biton – https://bitonproject.org – is a peer-to-peer network for anonymous routing and storage. As much as we like to think of the Internet as a safe space, putting trust in central entities has paved the way for censorship and surveillance that harm our digital freedoms. biton joins the long-running efforts for decentralized networking, where users cooperate in running services and hosting data, effectively bypassing information controls by third-party platforms or infrastructure.

Our approach is to interconnect decentralized applications, leverage the existing long-lived connections with trusted peers, and mix traffic in ways that an adversary cannot know who is the originator or recipient of a request. Furthermore, we employ techniques such as encrypted content replication to serve as cover traffic and in this way hide metadata about user activity. Users participate according to their capacity; the more resources they can contribute, the better the anonymity and performance for themselves, their friends, and the biton network overall. With this setup biton can support decentralized anonymous applications for group messaging, social media, file sharing, blockchains, and similar use cases.

biton is built around the concept of swarms — groups of peers that store encrypted files and relay requests through one another. These swarms operate in two levels. First, they enable communities to create their own isolated local networks for services and content that is relevant to their members. Second, biton interconnects peers across community networks in order to create a global network that can support anonymous applications.

Compared to other peer-to-peer overlay networks, biton differs by (1) building upon social trust, (2) supporting both low-latency routing and redundant storage, (3) accounting for node heterogeneity with regards to availability, bandwidth and storage, and (4) its special focus in evading surveillance and censorship.

Strong anonymity requires a large diversified userbase (anonymity set), diverse applications (i.e. an anonymity network for a specific use case reveals information about the interests of its users), constant traffic (to conceal metadata about user activity from network adversaries), and some confidence about the peers who relay requests (adversaries can infer information about user actions either by passively observing or actively manipulating the requests of the nodes they are connected to).

With that in mind, we believe that the way forward is to develop biton as a peer-to-peer network stack. This will allow us to build a general purpose anonymity layer by combining the trust relationships and the traffic load of independent applications.

biton will provide the following building blocks for developers:

A unified way to control cryptographic identities, and to generate unlinkable pseudonymous accounts that can be shared across applications built over biton. Each account has separate privacy policies (compartmentalization), that also concern routing.

biton provides flexible trust models that prioritize social relationships rather than relying on central authorities. In effect, we build a Web of Trust for biton user identities that comes with privacy controls, as users can select who gets access to their social graph. These trust relationships are available to decentralized applications, e.g. for discovering content and preventing spammers. In addition, trust is embedded into routing decisions so as thwart adversaries from isolating nodes (route capture and eclipse attacks). 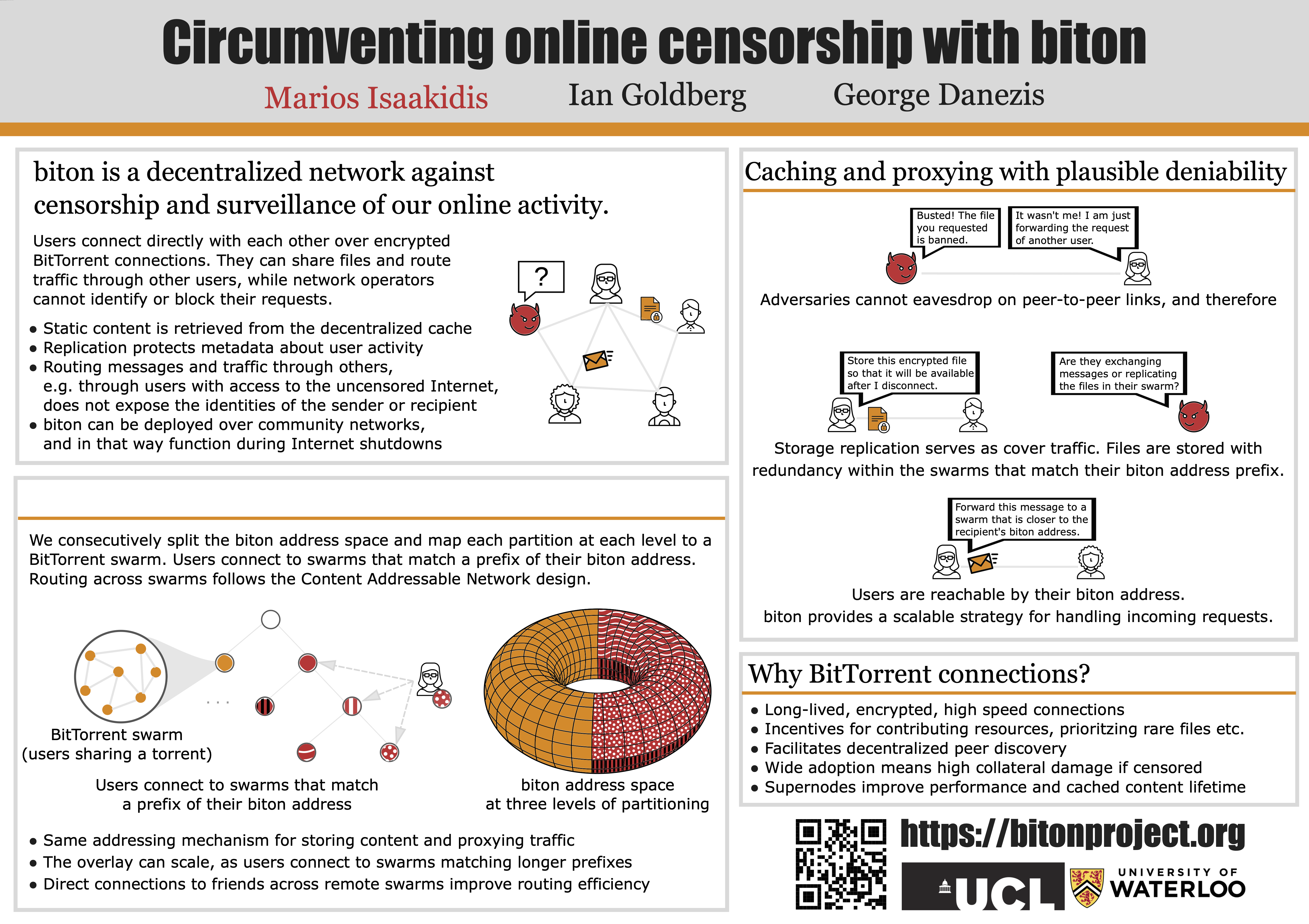 biton introduces a way to build a scalable overlay for routing and storage based on a variant of the Content Addressable Network. This approach performs consecutive partitions of the address space into zones as more nodes join the network. Users occupy adjacent zones in the address space that match their identity prefix according to their capacity to contribute bandwidth and storage resources. Requests to remote zones are relayed through the existing connections, taking into consideration trust relationships and other peer profiling metrics.

This mechanism for addressing nodes and files can be replicated for isolated, application-specific namespaces, which co-exist with the global biton network. In this way biton can also be used over mesh topologies and community networking infrastructures, and in so it can function during Internet shutdowns as far as users can connect with other biton nodes in their region.

Anonymity techniques, such as mixing messages and adding delays or covert traffic to hide user activity, come at a cost of bandwidth and latency overhead. biton aims to give users control over this trade-off. Overall, nodes who allocate more resources get in return better performance and anonymity for their requests, as well as to some extend for the requests of their friends and of all other users. This is further reinforced by the incentives built into the biton routing and peer profiling mechanisms.

In specific, nodes who contribute lots of resources ("supernodes") benefit from the following:

biton aims to give users control over the Anonymity – Performance – Resources trade-off via a layered approach, where they select an operation mode according to their individual needs, and "unlock" thresholds in certain anonymity functions as far as they comply with the respective criteria — such as connections with verified peers, ability to sustain constant traffic, application-specific accounts, and execution environment. This is done in collaboration with the application developers, who specify the minimum privacy level for their application.

For scenarios that do not require network-level anonymity, users can participate in application-specific swarms, or they can establish end-to-end encrypted connections directly to the destination. In this case, routing does not require additional resources.

When users need to conceal their network identifiers or their activity, biton offers the following operations:

In the context of the OTF fellowship we also developed a prototype implementation of biton that can run as a standalone application or in the browser. You can find more information at the protocol specification and source code repositories. Moreover, you can try a demo by visiting https://demo.bitonproject.org.

In detail, biton is implemented as an extension to WebTorrent, a BitTorrent client written in Javascript. Peer discovery is facilitated by the decentralized Mainline DHT using BitTorrent magnet links that encode application secrets, which peers need to prove they know upon joining a swarm. Communications are end-to-end encrypted using the Noise-C library compiled to WebAssembly.

The next challenge is to further develop biton with an emphasis on usability, equally for end users and application developers. The future of the Internet might as well reside in the local "swarms" with people we share common interests, building up to a global network where our fundamental digital rights are protected. But first, let's cultivate our garden.[1]

We are grateful for the early feedback from participants at Our Networks, the 32nd Multi-Service Networks workshop (MSN 2020), the Privacy, Infrastructures, Policy Workshop, CrySP seminars, HackFS, and the Spark University Hackathon. Finally, we would like to thank Ian Goldberg, Professor at the University of Waterloo, for his invaluable support throughout the OTF Information Controls Fellowship.

If you would be interested in adopting the biton network stack for your project, please do reach out at [email protected]