From the very beginning of OTF’s operations, it has sought to build trust with those being denied their digital freedoms around the globe. As the program has matured, the growth of this trust has become increasingly evident. Each fall, OTF holds a summit bringing together the projects and fellows currently being supported, Advisory Council members, and key stakeholders within the larger internet freedom community. In its first year of operation, OTF hosted roughly 20 individuals for the summit. The following year, the annual report noted an increase to “more than 50 participants”. The year after that “more than 70” attended and by 2015 that number had increased to “more than 150 participants”. In the subsequent years, this number would have continued to grow had OTF not capped attendance with the goal of maintaining the personable feel of the event and ensuring it remained a venue for substantive collaboration.

Over this same time period, OTF has witnessed a tremendous (and ongoing) increase in the number of submissions it receives each year. The below chart illustrates the growth trajectory of project applications. 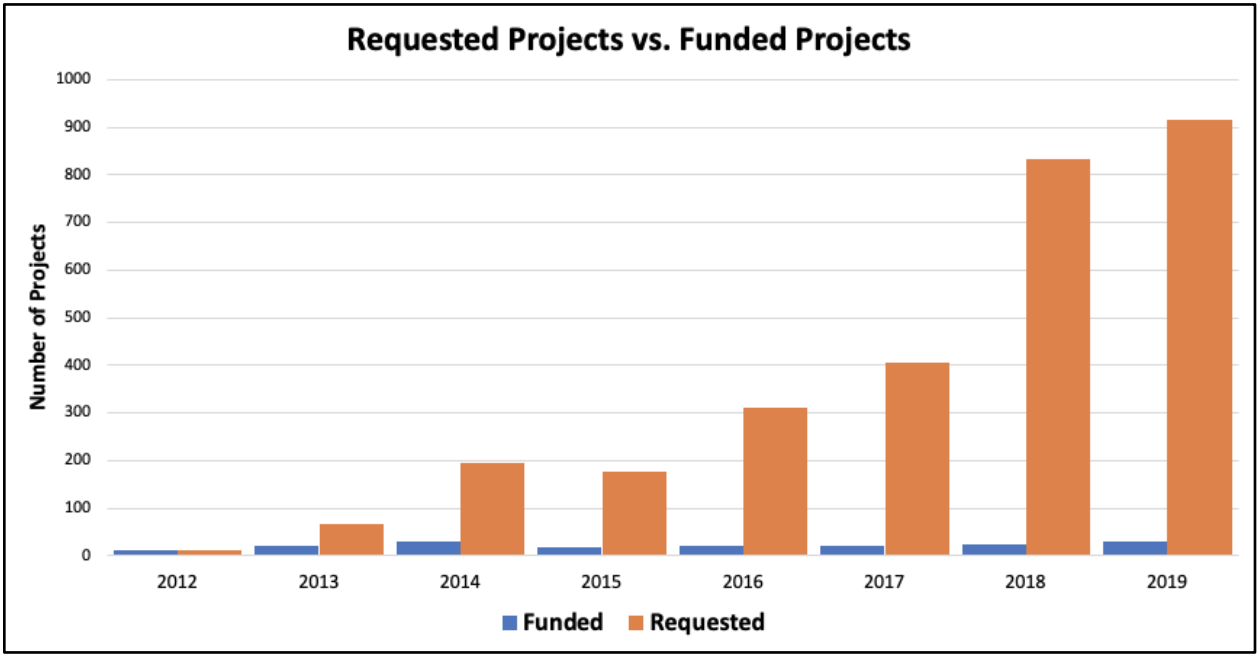 This increase cannot be attributed to a substantial increase in funds, given that OTF’s budget remained relatively flat until recently. Nor can this be attributed to the same pool of applicants applying more frequently. OTF’s data visualization platform demonstrates that the overwhelming majority of applicants are first time applicants. The platform also highlights the continued growth in applications focused on assisting a specific country or region. This geographic diversity was highlighted in OTF’s latest annual report. 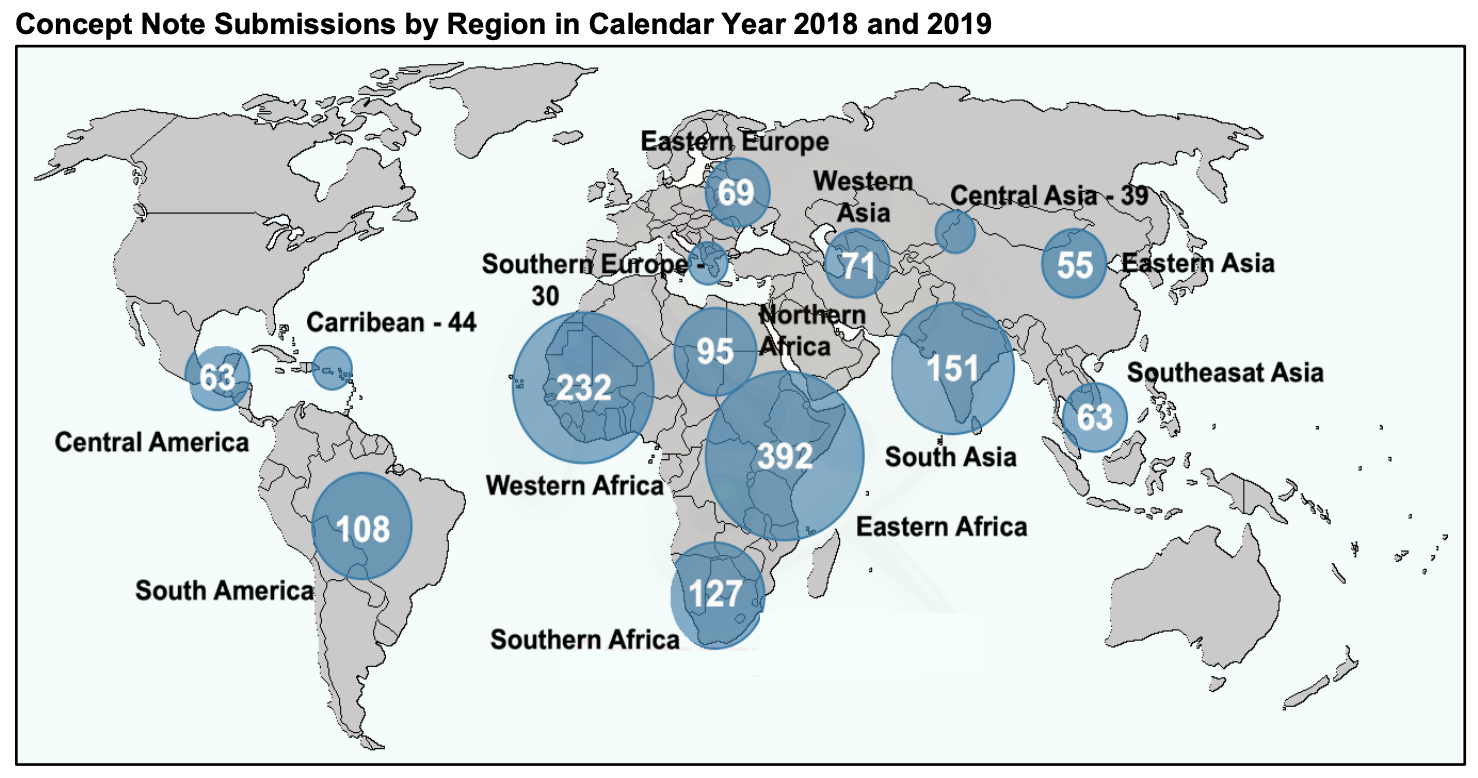 This dramatic rise can be more accurately attributed to OTF’s commitment to understanding and supporting the needs and risks of those on the ground. Around the same time as the initial growth in applications, OTF’s annual report highlighted the importance of the OTF Community Lab stating it “brings together and strengthens the internet freedom community through initiatives cultivating deeper cooperative and collaborative relationships, improving knowledge sharing, taking advantage of synergies, and increasing diversity as more at-risk communities come online and under threat. As the internet freedom community grows, so do the needs and challenges which must be solved with community-wide strategies bringing to bear collective vision and action, and properly working beyond cross-cultural barriers.” The importance of establishing the Community Lab was made clear by the enormously successful efforts of the already established Localization Lab which the same year reported “over 4,600 participating volunteers contributing to the submission and verification of more than half a million translated words” and had also undertaken numerous community engagement initiatives.

The following year OTF reported having supported the Internet Freedom Festival, considered one of the largest and most inclusive events of its kind, which convened “more than 1,200 people from 114 countries, featured over 220+ sessions and over 60 partners” This event has continued to grow in subsequent years, thanks in part to OTF support, and now describes itself as “a tool to grow, diversify, support and strengthen solidarity between the diverse networks working on digital rights, online privacy, safety and security, and the future of the Internet.” This is in addition to supporting more narrowly focused events like Iran Cyber Dialogue.

The OTF team’s commitment to a community-first approach has resulted in a level of trust that has allowed OTF to support projects in the most highly repressive environments for internet freedom in the world such as China, Hong Kong, Venezuela and Iran. This is a direct result of the trust relationships OTF has been able to develop with a diverse range of key stakeholders including human rights defenders, technologists, researchers, journalists and activists. OTF noted in its recent annual report the broad outlines of this assistance in Hong Kong and Venezuela. Providing this type of support was only possible following increasing levels of engagement with international media outlets, academic institutions, and local civil societies in these countries. The impact of these engagements is difficult to overstate given the extremely dangerous situations these highly repressive environments foment. Indeed, during the recent Hong Kong protests, OTF noted this May that it had “launched new digital security and rapid response efforts in Hong Kong to ensure users have the support and resources they need to respond to increasing censorship and surveillance threats, and has deployed new censorship detection probes to monitor and analyze increasing censorship.”

Over recent weeks this hard earned trust has been jeopardized as a result of recent actions taken against the organization. While OTF leadership and staff have taken every opportunity to communicate transparently with the internet freedom community, these efforts have not proven adequate in the face of repeated efforts to breach the organization’s independence. While the concerns of the internet freedom community have been repeatedly conveyed to OTF staff, the damage has also been reflected in the program’s rapid response applications. OTF has now provided this type of support in well over 100 instances including China, Cuba, Egypt, Iran, Russia and Syria. Many times these are the most sensitive projects the program supports requiring the highest degree of trust. Over the previous month, the number of submissions to this Fund have declined by 33 percent. This suggests that potential applicants in emergency situations have to face these threats without OTF being able to provide them with the support they need, a frightening prospect for the front-line activist with even scarcer places for support.

The time, energy and resources that have been expended by both OTF and the internet freedom community to improve the lives of the billions exposed to repressive censorship and surveillance is difficult to quantify and even harder to earn back once it is lost. While the OTF staff remains committed to prioritizing the needs of this community, it is also important to highlight the long road taken to build this trust and the damage these threats to the program’s mission and independence have wrought.