Misinformation, particularly of a political nature and transmitted via social media, has become an object of global fascination and fear in recent years. The ongoing Covid-19 pandemic—accompanied by its “infodemic” of conspiracy theories spread across Facebook and Twitter by peripheral voices and politicians alike—has only magnified the world-shaping potential of this type of information manipulation. 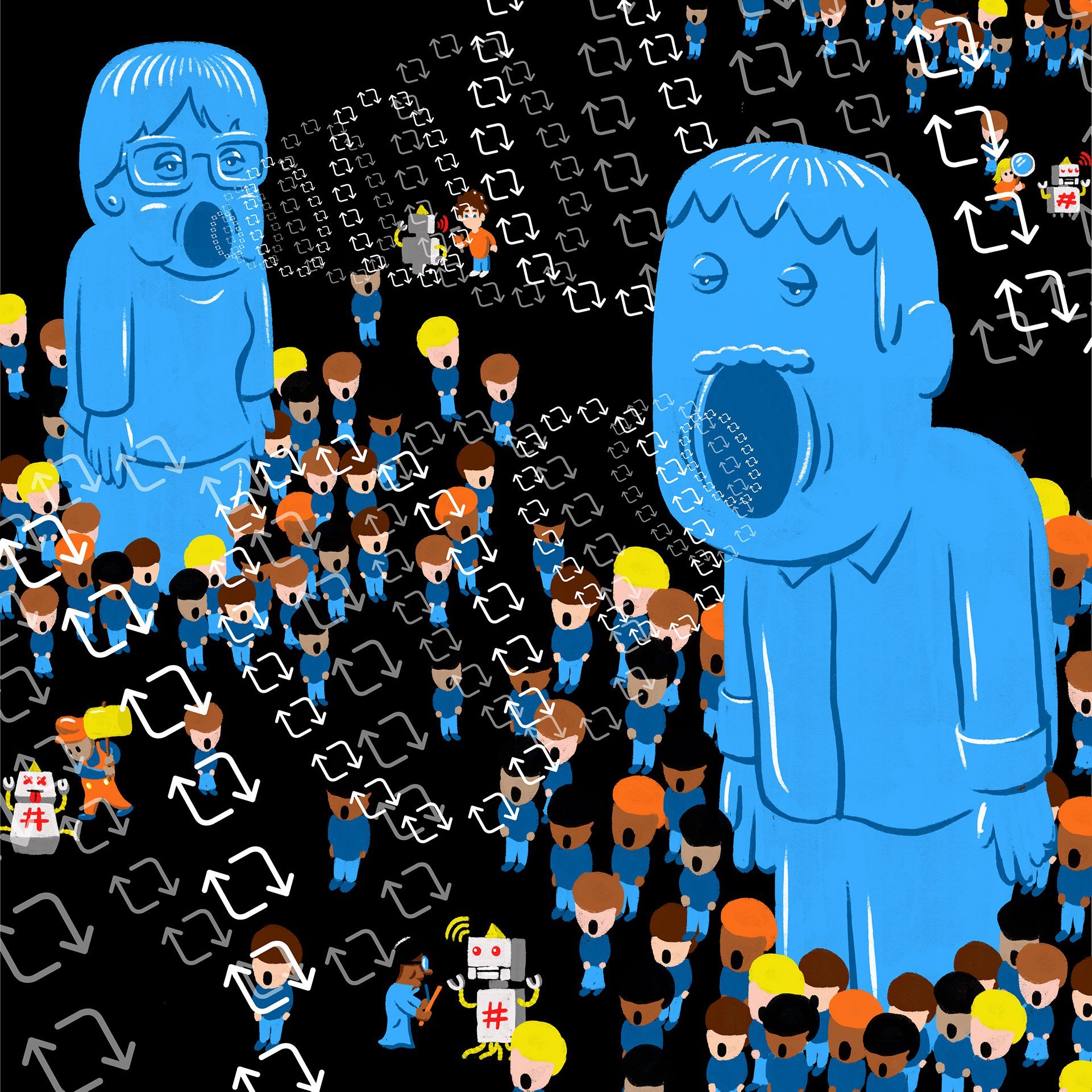 But while concerns over online political misinformation in the West have largely centered on its potential to disrupt elections or sow social discord, its role in regions like the Middle East is often quite different. Many countries in the region lack meaningful electoral accountability and tend to systematically repress political dissent. Social media platforms in these environments therefore serve as remarkably free spaces in which users can voice long-forbidden, often anti-authoritarian sentiments to help facilitate the mobilization of democratic movements. Yet in the wake of uprisings like 2011’s “Arab Spring,” surviving regimes have often sought to contest and manipulate social media as a new type of information control to frustrate future moves towards democratization. In mid-2018, Information Controls Fellowship Program (ICFP) fellow Alexei Abrahams set out to investigate this troubling trend by monitoring the political role of social media (particularly Twitter) in the region.

Hosted at the Citizen Lab, Alexei collaborated with researchers like Marc Owen Jones and Andrew Leber to investigate Gulf Twitter threads in the wake of the diplomatic dispute between Saudi Arabia and Qatar, map the polarized discourse surrounding the assassination of Jamal Khashoggi, and track the most recent wave of protests that swept across the Middle East in the fall of 2019. These investigations revealed a profoundly unequal online space where many spoke but few were heard as revolutionaries and reactionaries rallied their respective followers to dominate the political discourse, often aided by brigades of bots.

Analyzing data from the summer of 2017, Alexei found that Twitter in the Middle East is no longer a tool of liberation. As often as not, Twitter users in the region coalesce around hashtags promoted by bots or state-affiliated influencers. Such hashtags do not constitute an open forum for constructive debate, but instead resemble political rallies to which users are mobilized or counter-mobilized to chant for or against specific policies (e.g., “we demand the closing of Al-Jazeera News!”). Even when political hashtags are not overtly one-sided, Alexei’s research revealed they can still quickly polarize into separate narrative communities that minimally engage with one another.

This type of divisiveness can be seen with the hashtag #جمال_خاشقجي (#jamal_khashoggi), the main Arabic hashtag trending in the wake of the Saudi dissident journalist’s October 2018 disappearance and murder in Istanbul, Turkey. Alexei and his research partner Andrew Leber found that the retweeting behavior of the most influential accounts on this hashtag clearly delineated separate ideological camps (Figure 1, below), with the pro-Saudi camp finding little common ground with audiences shocked by Khashoggi’s murder. The hashtag also exhibited a remarkable inequality of voice. Over 91% of #jamal_khashoggi tweets were simply retweets, with about 4 in 5 users abstaining from offering any original commentary. A mere 281 out of 365,000 users garnered 80% of the total retweets on the subject. Notably, this profound degree of inequality was found to persist across virtually all of the hashtags trending throughout the fall of 2019, with most of them linked to uprisings in Egypt, Lebanon, Iraq, and Iran. 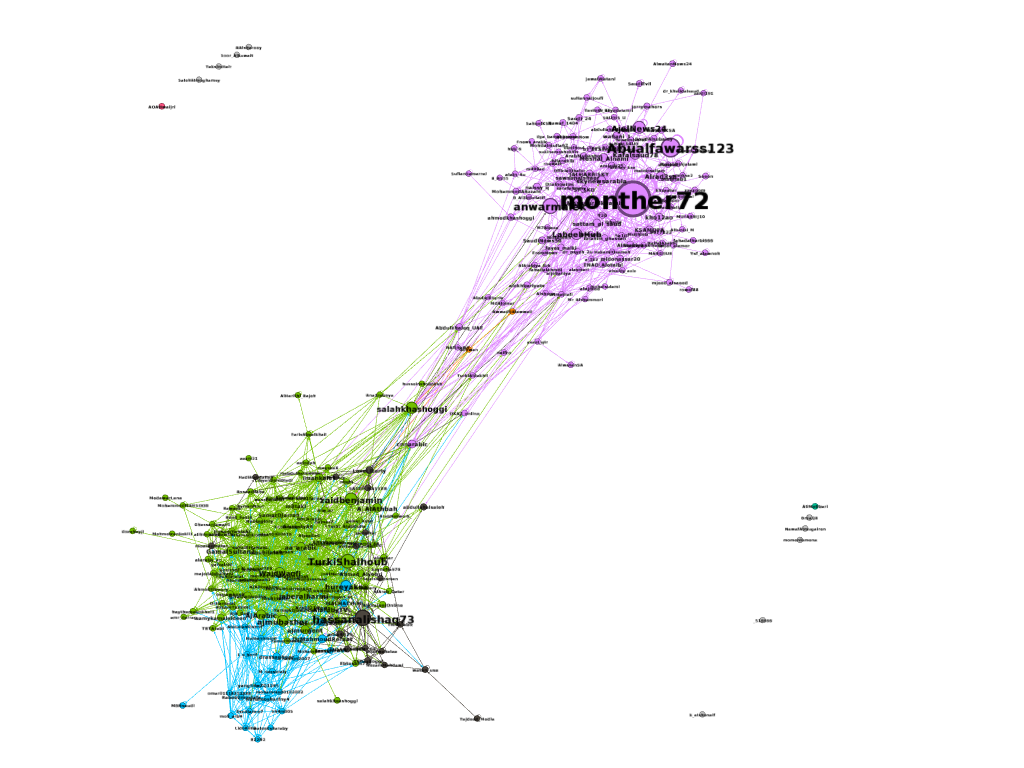 Such inequality in voice begs the question—how much of this engagement is “real”? Perhaps surprisingly, a lot of it. Adopting Marc Owen Jones’ hashtag-based anomaly detection method for spotting bots, Alexei and Leber found tens of thousands of bots across many hundreds of hashtags, from 2017 to the present. Despite widespread allegations that Middle East Twitter is infested with bots, however, the two found that bots seldom constituted more than 5 to 9% of the total number of users contributing to any given hashtag. Interestingly, their analysis revealed smaller hashtags tended to be “bottier,” while more successful hashtags like #jamal_khashoggi or #lebanon_rises_up drew enormous numbers of real users that effectively drowned out the bots.

In many ways, then, inequality of voice—more than inauthenticity of voice—can be seen as the defining feature of political Twitter in the Middle East. Seemingly aware of this, repressive regimes in the region appear to be working behind the scenes to sway the discourse in their favor by employing spies within the platform and blackmailing influencers. What this means for social media users seeking to find accurate information is still to be seen. No longer a liberation technology, and not yet a tool of complete repression, Alexei’s research illuminated Twitter in the Middle East to be a unique window into the relative momentum of social forces struggling for the region’s future and a likely misrepresentation of true public opinion.

Alexei’s efforts produced thought pieces in several publications, including three academic articles which you can read here, here, and here. He continues to monitor all major Middle East Twitter threads relevant to the Covid-19 crisis.