Director, Office of Internet Freedom, Broadcasting Board of Governors 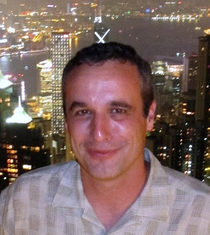 Chad joined the Broadcasting Board of Governors’ Office of Internet Freedom in 2018.

As the Director, Chad is responsible for strategy development and the day-to-day operations.

Chad has accumulated nearly 20 years experience utilizing his technology and security knowledge to advance the capabilities of pro-democracy journalists and human rights activists from around the globe. Prior to joining the with BBG, Chad was RFA’s Chief Security Officer and OTF’s Director of Technology. He joined RFA in 2006 and by 2009 became the Managing Engineer of Systems and Security. While at RFA, Chad was part of an internal RFA working group including RFA’s President, Chief Technology Officer, General Counsel, and Chief Financial Officer to define the founding principles under which OTF would begin to operate. Before RFA, he worked at Radio Free Europe / Radio Liberty in Prague, Czech Republic.